A very interesting exhibition opens on January 30 and runs through February 27, 2016 at the harts gallery, 20 Bank Street, New Milford, Connecticut. 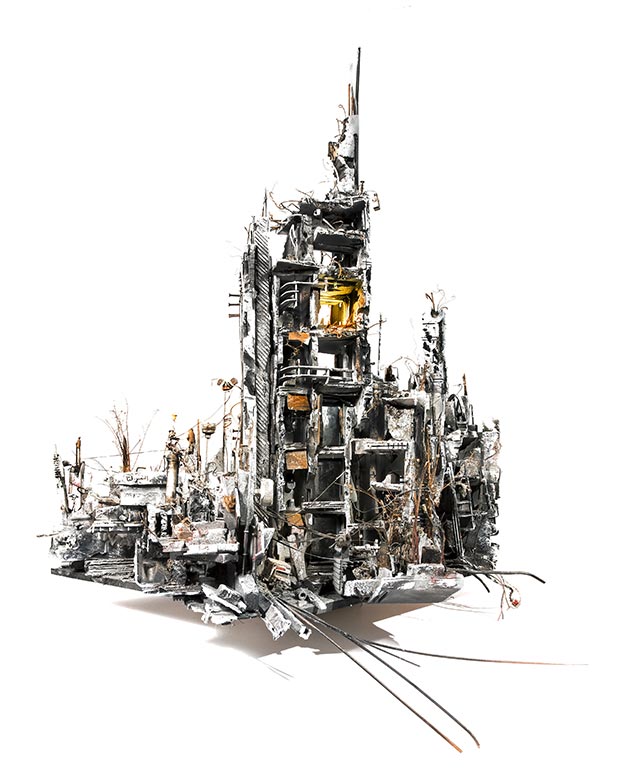 Mohamad Hafez (1984) was born in Damascus, raised in the Kingdom of Saudi Arabia, and educated in the Midwestern United States. A New Haven-based architect, Hafez uses plaster, rigid foam, paint and found objects to create three dimensional architectural streetscapes, installations and wall murals of his native Syria that are deeply personal, photorealistic and surreal. Expressing the juxtaposition of East and West within him, Hafez’s art represents the urban fabric of the Middle East, and serves as a backdrop for his own political and social expression.

Responding to the atrocities of the Syrian war, Hafez’s recent work depicts cities besieged by conflict to capture the magnitude of the devastation and to expose the fragility of human life.

In deliberate contrast to the violence, however, his art also imbues a subtle hopefulness through the incorporation of verses from the Qur’an.

These verses are at the core of Hafez’s vision, endeavoring to kindle hope and raise spirits in the midst of so much devastation. Scenes reiterate narratives from the Qur’an in order to affirm that, even during the darkest of times, patience is necessary for the blossoming of life, and eventually, justice will prevail.

Today is a very solemn moment for the United States.

The Supreme Court expressly took away a Constitutional right from the American people that it had already recognized. They simply took it away. That's never been done to a right that is so important to so many Americans.

Reply on TwitterRetweet on Twitter29769Like on Twitter215922Twitter
Load More...
Back to Top