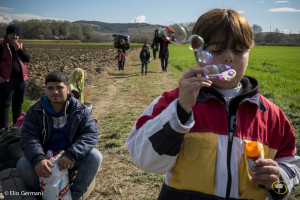 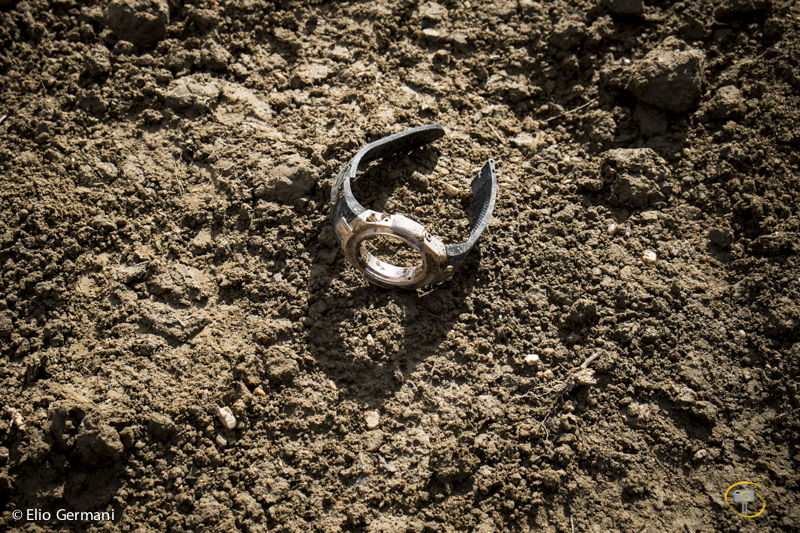 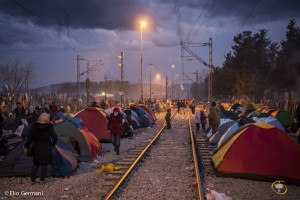 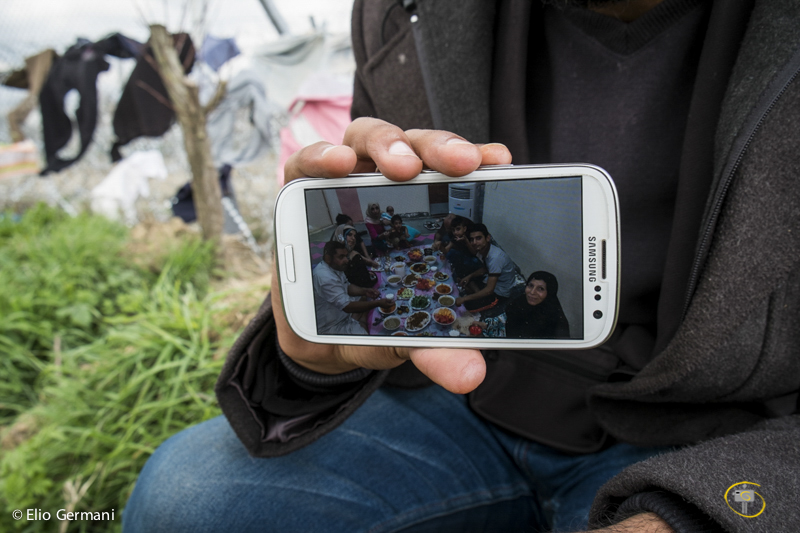 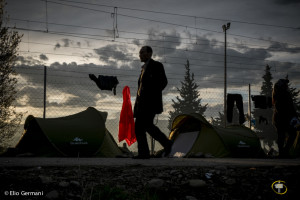 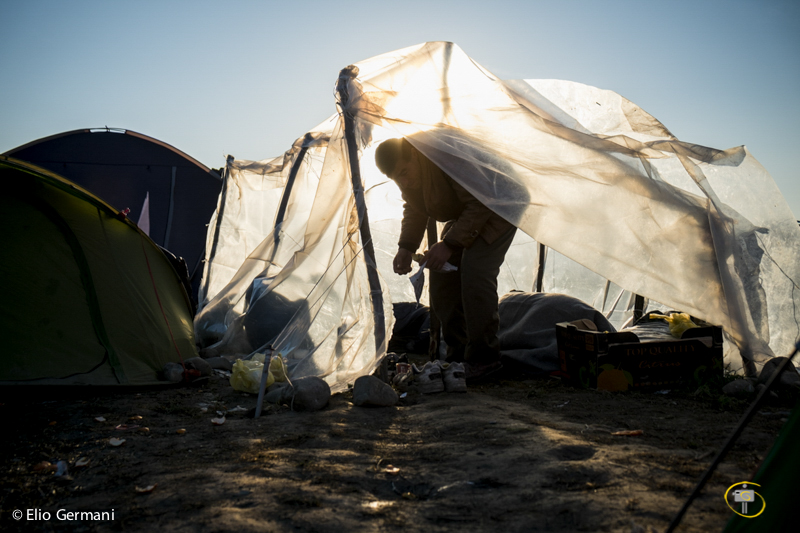 The suspended Time of those who escape

Kilkis region, Greece, early March. A few meters from the motorway leading to Macedonia, a disused Kaoil petrol station has become since a while a camp on the way to Idomeni. A large sign with a man figure wearing traditional Greek clothing reads "Welcome to Greece". Cars have been replaced by a few dozen tents set under the gas station canopies available. Families carrying blankets, sleeping bags and bundles start off from this petrol station on the short cut leading to Idomeni, just a few kilometers away.

I set off with a group that heads full of hope towards the Macedonian border. The trail runs along the fields, the landscape is gentle and recalls the near beginning of the spring. Further away, the snowy peaks of the mountains on one side, on the other the Macedonian city of Gevgelja. 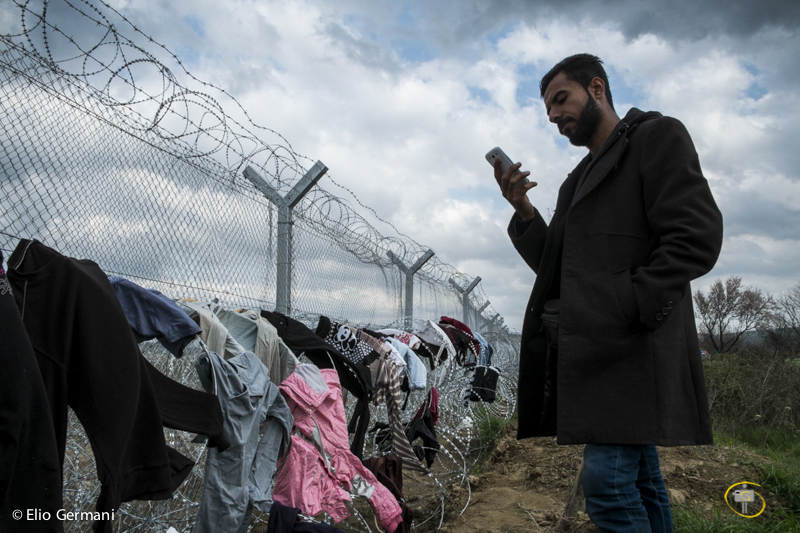 After crossing the bridge over the Vardar a family from Aleppo stops for a short break. A guy pulls out from his jacket a plastic tube, and, suddenly, dozens of soap bubbles hover in the air. It is difficult to believe that less than two kilometers away thousands of people are stranded on the border in so precarious conditions.

As soon as the bubbles disperse in the air we continue on our way towards the border. On the ground, amidst the mud that is slowly drying under the morning sun, something attracts my attention: a wrist plastic watch with a big hole in the middle where the mechanism used to be. An accidental symbol of the suspended time of those who flee from persecution without finding anyone to welcome them. 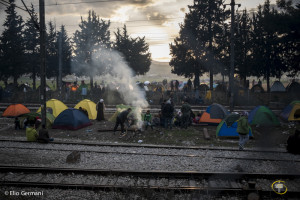 In a few minutes we reach a small wood next to the railway, close to Idomeni station, where men of all ages are looking for firewood.

One can notice the presence of the camp long before it can be seen. The smoke of fires lit during the night reaches out far away: it is not only the firewood that is burning, but anything that can burn, including plastic and waste.

The railway connects Thessaloniki to Skopje and cuts in two the camp area, a stretch of camping tents and big white tents used by NGOs. The tents occupy an area that goes from the railway station to the double barbed wire fence running along the border. The first one was built in November 2015; in February 2016 the Macedonian authorities built a second fence at a 5 meter distance from the first. A gravel road in between the two fences allows army vehicles and police guards to patrol the border.

At the only border crossing point, which opened for around 200 people per day, a crowd is waiting. 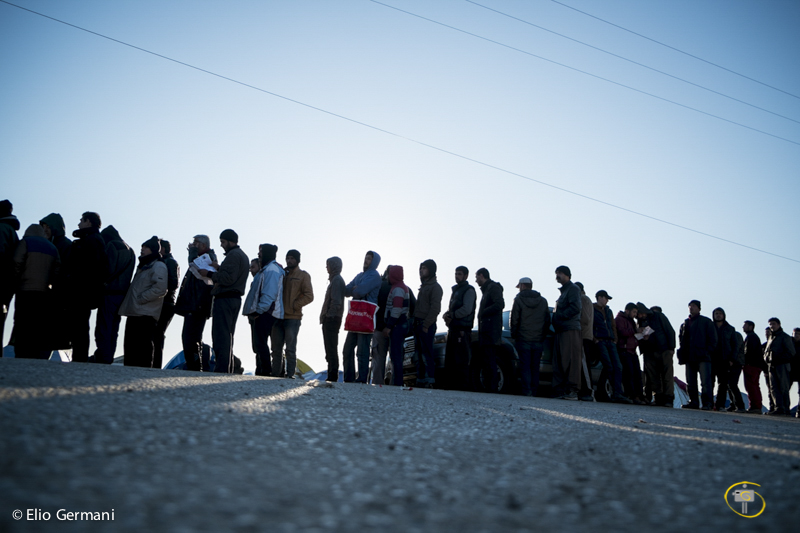 Just close to the acces gate which allows entry to Macedonia I meet Ali, 23, from Diyala province, northeast of Baghdad, close to Iran. A friend who is about to enter Macedonia after a night spent outdoors not to lose his turn, asks him to fetch some food for his family. As we go buy some cookies, Ali tells me he would like to go to Germany, simply because it is the only country that still seems willing to receive those fleeing conflict in Syria and Iraq. A safe place to stay, away from war and barbed wire.

His journey began on February 9, when he left for Turkey by plane. He then boarded a rubber boat that took him from the Turkish coast to the Greek islands. After reaching Athens he took a bus to Thessaloniki; a taxi brought him and his traveling companions to the camp. His parents remained in Iraq: being sick, his father could not bear the hard journey Ali is doing.

Nostalgically, he shows me some pictures of his family and talks about his city, where life had been rendered unbearable by continuous clashes between Shiite and Sunni militias. Three, four bombs per month used to burst in Diyala when he left, the curfew was constant, all shops were closed and streets were empty. A few days before our meeting he had lost his best friends in a suicide bombing. He blames the Iraqi government for dividing its citizens: Sunnis and Shiites used to live peacefully together before, mixed marriages were not uncommon. Now even children carry firearms and kidnappings are so frequent they do not surprise anyone anymore. Ali is here without knowing if he will able to continue his journey.

Today nobody can cross the border anymore, gates are closed and the containers that used to house the registration center are empty. No more queues to get a waiting number. 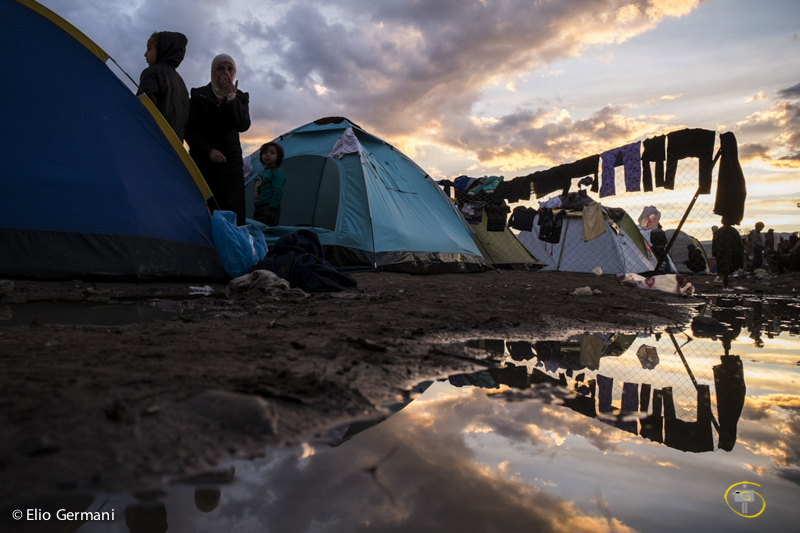 Living conditions in Idomeni are similar to those I already witnessed in other border camps since I started the story about the Balkan route. Yet the difference is in the numbers: it is estimated that around 15,000 people are staying in the camp of which one third are children. Numbers are not accurate because the flow is constant and the camp has no delimitation. Tents are set everywhere, on the rails, on the platforms, on the gravel but especially in the fields, which at every rain turn into lakes of mud.

The real emblem of days spent here is waiting: people wait, now in vain, that the gate opens. They stay in line for food, for toilets, for papers, for medical checks.

Since Macedonia has decided to indefinitely close the border, the situation became desperate. The recent deal with Turkey does not hint to anything positive.