In Mexico, the small-scale producer of coffee tied to traditional and organic farming, are fighting a battle against two large multinational companies: the Swiss Nestlé, a global leader in the food industry and Agroindustrias Unidas de México (AMSA), which controls about 50% of exports of the country.

Nestlé has acquired a patent on a genetically improved plant that facilitates the solubility of the coffee powder. Thanks to this license, the company will not only expand its control over the coffee producers, but will also increase the risk of genetic contamination on the organic plantations, of which Mexico is the first manufacturer in the world. The granted patent poses a serious threat to the economy of more than 480,000 farming families and about 500 rural and indigenous organizations that are depending on the coffee. 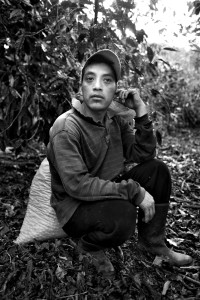 “The improved seeds will not bring any benefit because the quality of the product gets inferior and it has to be sold at lower prices. The coffee can no longer be exported, it will be only for domestic consumption. The reason why I am against this system is because introducing chemicals does not preserve the territory”. So says Ramiro Rodriguez Munoz, a small producer ofChiapas and one of the CESMACH members.

Campesinos Ecológicos de la Sierra Madre de Chiapas is a cooperative operating in the area since 1994.
“For 20 years now we have been cooperating with regional producers in order to let them self-manage their own activities” says Octavio Carbajal, coordinator of the organization. “We try to increase the productive side through marketing strategies which primarily take into consideration individual’s health. We give work to the poorest people, we educate them, we try to make them realizing the effective value of their product and also we guarantee a fair profit”.

CESMACH puts together 491 affiliates in 32 different rural communities of Chiapas, which means lives of nearly 500 families depending on their work.

The farmers, facing lots of difficulties, carry forward organic farming, abiding to a strict set of rules meant to protect the fragile environment of the biosphere.
“The current situation grew worse due to several factors related to Roya, a fungus that causes the death of plants, which has brought the coffee production down by 25%” continues Octavio Carbajal, “another relevant factor is that we are producing coffee in an overgrazed area. Competition from other industries does not help. Competing with large multinational companies is very hard, we are small-scale producers while they have both political knowledge and endless financial resources”.
In agreement with the Mexican government and AMSA, Nestlé has invested over the past five years 600 million dollars in Mexico, where several areas intended use is coffee production: e.g. Veracruz, the mountains of the state of Oaxaca and Chiapas, where the altitudes and a mild climate provide ideal conditions for the coffee production.
The cultivation of coffee in Chiapas secures the livelihoods of many Guatemalan families. The farm hands and pickers arrive on foot from neighbouring Guatemala during the harvest period.
Alfredo Ramirez Lopez, whose task is pruning and picking the coffee, says: “I’m from Guatemala, it is a short trip, it takes about 7 hours by car. I am a seasonal worker. The value of 70 kilos of coffee is 55 pesos for a standard sack. We are paid on a piecework basis. The work lasts from 6 to 8 weeks. I earn an average amount of 3000 pesos 500 of which are needed to cover travelling and eating expenses; but it always depends on how the harvest goes. This year the land lords are losing many plants because of the Roya therefore it is not a good year”.

Caused by the fungus Hemileia vastatrix, appeared in Mexico about 3 years ago, the Roya, rust, turns the leaves yellow and makes them unable to complete the photosynthesis process. The coffee that is produced from infected plants has a sour taste and no body.

The most affected countries are Colombia, Costa Rica, El Salvador, Guatemala, Nicaragua and Mexico, where the Roya spreads rapidly, also as a consequence of heavy rainfalls that carry the fungus from one plantation to the other.
These days farmers are trying to restrain diffusion of Roya through application of fungicides during the wet seasons. In some areas, the plantations have been moved to higher levels, up to 1,800 km, where it is very difficult for the fungus to reproduce itself.
As Naphtali Guillén López, president of Cesmach, explains “we haven’t found yet effective remedies against Roya. We have farm premiums projects through which the Government provides farmers the money needed to offset losses. Thanks to these funds we had the opportunity to give additional benefits to our members including improvements to health care, education and nutrition levels. We have an internal regulation which specifies that a farmer is never allowed to have more than 10 hectares available. We are an association made out of small producers and only having few hectares of land each at one’s disposal can ensure respect for the environment”.

Unfortunately the social funds are insufficient and the call of the farmers is desperate: “on behalf of the whole community we ask for a concrete help and a treatment for the Roya. We depend on coffee and if things continue this way it can only get worse. Nestlè gave an incentive to the farmers, but the seeds that the company wants to introduce are hybrids and are not fit to be used in the territory. Those improved seeds may be resistant to Roya, but on the other hand they could produce other parasites”. The eco-friendly farming is carried out using a growing method, the “bajo sombra,” i.e. in the shade of fruit trees and small gardens, following the rules of “Pacha Mama”, Mother Earth. This way of cultivation is very laborious because of the altitudes but it ensures a unique quality to the body and flavor of the grain. 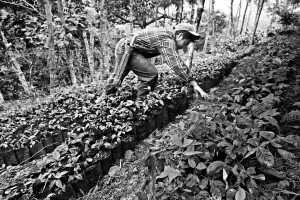 “My plants nursery is full of trees,” says producer Lucas Salodado “Plants that need shade are of a better quality. AMSA produces coffee of such a quality that does require sun and that is the reason why they cut the trees of the forests, causing environmental damages. This is the main difference between the action of a small-scale producer’s organization and a large international company. Luckily Nestlé has still little leverage in this area, but the company tries to convince small farmers to buy their seeds because they are resistant to Roya, without explaining that such plants will have short life. My plantation will last at least 10 to 20 years, plans grown out from their seeds will last much less. Their plantations need chemical fertilizers, whereas we use some compost at the most. Our territories have a diversity of plants and as a consequence the soil is richer and full of nutrients”.
 
The Nestlé project was launched in August 2009 in Mexico City. It’s called Nescafé and includes a series of objectives that will allow the company to further optimize its coffee supply chain: in addition to the 200 million already invested in the last ten years, the corporation will allocate by 2020 additional 500 million in the coffee projects, doubling their direct purchases from farmers and their associations.
From the Nestlé official website you can read that: “within 2020, 220 million coffee seedlings shall be distributed with an high yield and strong resistance to help farmers to regenerate their plantations and, consequently, to multiply the productivity of the existing lands in order to increase their income.

Nestlé has already distributed more than 16 million coffee seedlings in the last ten years. “But the Mexican farmers already know the type of coffee they want to produce and many of them want to be free to decide who to sell it and at what price”.
“Nescafé is a plant produced in the lower part of Chiapas and is obtained by grinding beans similar to coffee ones and mixing them with a second choice coffee”. So says Ranulfo Roblero Rodriguez, a small producer. “I have been working for Cesmach for 19 years now. I cultivate the coffee since I was 14 years old, I am now 72. The Government is distributing these modified seeds to farmers but we continue to grow our quality, which is Almacigo” 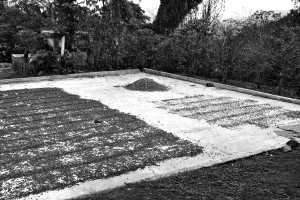 Alfredo Rodriguez Velasquez, farmer and senior partner of Cesmach, explains: “Our qualities of coffee are Bourbon, Arabica and Marago, hybrid but old. We do not want the improved seeds that government is offering us. For us, people of the Sierra, planting their seeds is not convenient because such seeds have just 3 years of life, we would not have enough money, whereas our seeds are productive for even 60 years. We use our money to cultivate, but now we are asking the government for help in order to maintain the high quality of our coffee. Cesmach told us that ours is a good quality product and has to be sold at an higher price. The plants of Nestlé not only have a shorter life but also the taste of the coffee produced is poorer in quality”.

Shoot4Coffee is a multi-disciplinary project organized by Shoot4Change in Chiapas, aimed at improving the living conditions in the coffee farming.

S4C cooperated with CESMACH to create a multimedia documentation of the current conditions of the Mexican coffee industry to show the real economic and social cost of a cup of coffee. 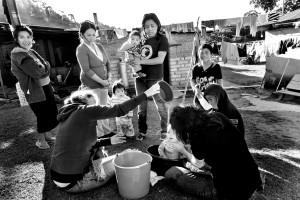 Volunteers from Shoot4Change did not just document the living conditions in the plantations. They worked on the territory to provide health services to Chiapas’ residents through the creation of a Medical Brigade based on volunteering.

Doctor Almeida Alejandra Velasco says: “Our aim is not only to safeguard people’s health: we want to show the locals that there is someone in the world that does care about their lives and their difficulties. We are here to help them to develop instruments and resources that will give them the opportunity to access services such as health and education. As well as bringing medicines to locals, we are also trying to convince them that they are not alone and we can do many things to help them. When we have a cup of coffee we need to reflect on what is hidden behind. Our aim is to give these people the opportunity to live and achieve happiness”.

The Medical Brigade has been operating, completely for free, in 14 of the 32 communities where CESMACH works, for a period of 15 days. Examining 557 patients and distributing medicines for an overall value of about 2,500 Euro.

If Russia had bombed Paris imagine advising France to cede Lyon and Marseille to not humiliate Putin.

Reply on TwitterRetweet on Twitter11590Like on Twitter67877Twitter
Load More...
Back to Top